Thank you to Lexie for a smart and informative overview of Writing Assessment in the Early 21st Century by Kathleen B. Yancey.   Yancey reviews the history of writing assessment and describes three waves: testing, holistic scoring, and portfolio and program assessment. During her presentation, Lexie had us consider what we may learn from this history of writing assessment.  In the first wave, there was much confidence placed in the assessment professionals’ ability to quantify good writing. Educators, on the other hand, were more concerned with validity rather than reliability and efficiency. However, it took 20 years for their concerns to create change in the system. The second wave included an actual writing test to evaluate writing.  It soon became apparent that the test, however, was a measurement of more than just writing. It also became a bellwether correlating to wealth and parental education (not just writing). The third wave is marked by collecting and scoring multiple drafts of writing, also known as portfolio assessment. In this wave, writing assessment became recognized as a field. Here questions emerged regarding who holds the “power” in assessment.  How does it help to shape identity in students? How does it help support learning communities and programs?

What role does empathy play in writing? 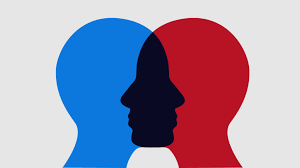 For the second part of our class (too brief a time) we considered an important question – what role might empathy play in writing?  What role does it play in higher education and becoming an “educated” person? What role does empathy play in a democratic society?  I have invited you to read closely two powerful texts – the first is the poetic prose piece entitled “War In Translation” by translator and journalist Lina Mounzer, and the second is a hypertext game that also delves into the recent trauma of the Syrian plight entitled “Syrian Journey“.  Does the flowering of poetic words or the procedural rhetoric of the game bring you to new understanding and a sense of empathy for what is unfolding in Syria? What knowledge emerges for you when considering these two texts in comparison?  I hoped to prompt an important reflection about the significance of empathy as a possible “outcome” when composing through varying forms of storytelling.  As writers, do you think about your audience enough to imagine them stepping into the shoes you stand in?  As writers, do you stand in other shoes, “trying on” a perspective that you haven’t lived, but you seek to know and illuminate more intimately?  As writers, why do we build arguments, worlds, representations of alternative (and alternating) experience?  Can we go places we haven’t yet been to through words written (or received)?  …And isn’t that the first and foremost goal when attempting to find words?  To send out a message, and to be received with understanding.  But how often is this gesture a beautiful yet failed attempt?  Toni Morrison, in her 1993 acceptance of the Nobel Prize for literature, had us consider the truth about writing and language – for it serves as an essential human tool for the impossible reach.  We use words even when we know they come short.  In some sense, this reach is what defines our humanness.  Language stretches to capture what is beyond description.  And every human being knows places beyond description, no matter their story. 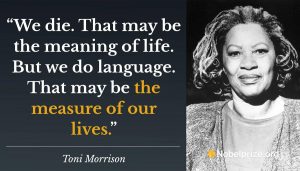 Morrison states, “The vitality of language lies in its ability to limn the actual, imagined and possible lives of its speakers, readers, writers. Although its poise is sometimes in displacing experience it is not a substitute for it. It arcs toward the place where meaning may lie…  …Language can never “pin down” slavery, genocide, war.  Nor should it yearn for the arrogance to be able to do so.  Its force, its felicity is in its reach toward the ineffable.  Be it grand or slender, burrowing, blasting, or refusing to sanctify; whether it laughs out loud or is a cry without an alphabet, the choice word, the chosen silence, unmolested language surges toward knowledge, not its destruction.”

The next theme for us to consider together is “Formula” in Writing.  Susan and Dylan will lead out the first part of the class with their presentations.  Susan has selected two readings:

And Dylan has selected one reading:

The Erasure of the Sentence by Robert Connor 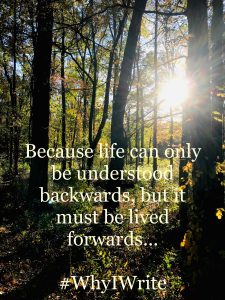 I know it is now “crunch time” when things are compiling regarding the school work for the semester.  Keep up your energy, and remember to just keep going!